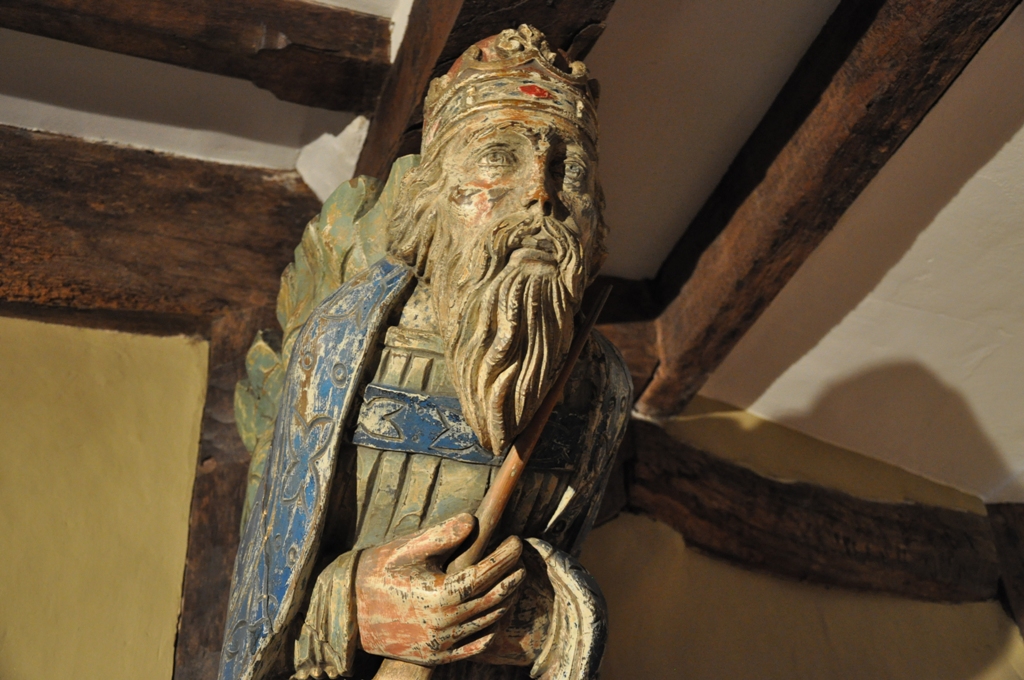 His large architectural carving was designed as a brace from one of the hammer-beam roofs of East Anglia that are some of the greatest technical and artistic achievements of medieval England. Its original emplacement would have been as a brace between a vertical wall post and horizontal, projecting hammer beam. On smaller and more modest roofs, such braces were simple wing-shaped affairs. But in great churches such as Bury St Edmunds, the braces were elaborated carved in high relief or, as in this case, fully sculpted as angels, saints, or mythical figures. This large, breaded figure clad on noble robes, wearing a crown and holding is hunched to follow the architecturally necessary shaped of the brace. A large Gothic leaf, of a form seen in late medieval roof carving throughout East Anglia, spreads across his back, concealing the massive mortise that once secured the brace to the corresponding hammer beam above (a similar arrangement may be seen in a brace shaped like a woodwose in situ on the nave roof of Bury St Edmunds). This figure is undoubtedly and English royal saint; and, given the popularity of the late medieval cult of Edwards the Confessor and the figure’s resemblance to contemporary depictions of the saint (i.e., the famous Wilton Diptych at the National Gallery), St Edward is the most likely subject.

The brace is composed of yellow pine, not oak. Pine, imported from Scandinavia and the Baltic, was a actually a common as building timber for English medieval roof carpentry. Its use allowed for the creation of structures that would have collapsed under their own weight if made of denser oak. In this instance, use of pine facilitated the elaboration of a simple, wing-shaped brace into a brace work of sculpture

Although a few traces of earlier polychrome remain, the current paint scheme is consistent with that applied to the interior woodwork of many churches by the Late Victorians, indicating that the brace remained in situ until at least the late 19th or early 20th centuries

PURCHASED FROM A PRIVATE COLLECTION.