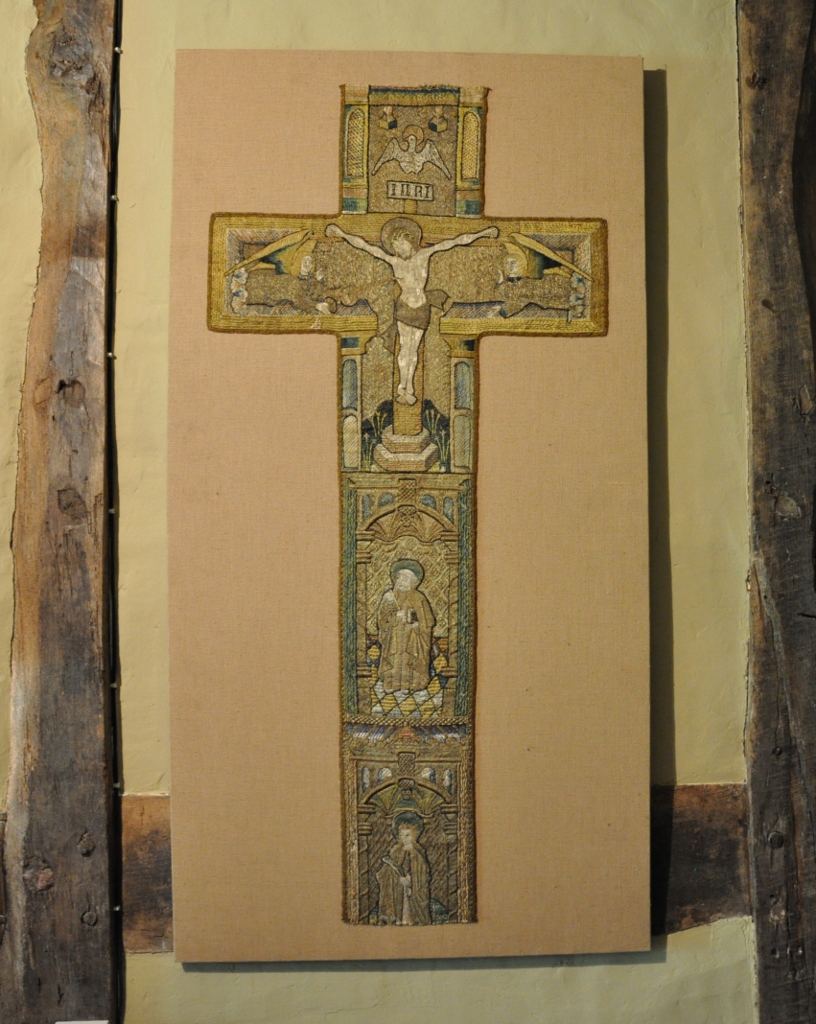 WORKED WITH POLYCHROME SILKS AND GOLD THREADS, DESIGNED WITH THE DOVE OF THE HOLY GHOST ABOVE CHRIST ON THE CROSS FLANKED BY ANGELS. BELOW WITHIN ARCHITECTURAL NICHES STANDS ST PETER HOLDING THE KEYS AND ST CATHERINE WITH PALM FROND BELOW.

ORPHREY PANELS ARE DECORATIVE BANDS USING SILK AND GOLD AND SILVER THREADS, THEY DECORATED THE CHASUBLES, DALMATICS AND COPES WHICH WHERE GARMENTS WORN BY THE BISHOPS DURING MASS CELEBRATIONS.

THIS ORPHREY IS LIKELY TO BELONG TO A GROUP OF VESTMENTS MADE IN LONDON WORKSHOPS BEFORE THE REFORMATION AND COMPARES FAVOURABLY WITH THOSE OF THE ORPHREYS OF SKENFRITH COPE. THE TUDORS ARE KNOWN TO HAVE EMPLOYED THEIR OWN EMBROIDERERS. FOR INSTANCE AN EMBROIDERER CALLED ROBYNET WAS HOUSED AND BOARDED AT THE EXPENSE OF THE QUEEN CONSORT ELIZABETH OF YORK (1466-1503). RECORDS SHOW HE WAS ALLOWED 2 POUNDS PER YEAR HOUSE RENT AND RECEIVED 1s.4d A WEEK BOARD WAGES. ROBYNET ALSO HIRED AND PAID OTHER EMBROIDERERS.

A MAGNIFICENT PIECE OF MEDIEVAL ENGLISH EMBROIDERY, STILL RETAINING GOOD COLOUR AND ORIGINALITY. LATER MOUNTED ON A LINEN COVERED BOARD .

PROVENANCE: FROM THE COLLECTION OF THE 17TH EARL OF PERTH, STOBALL CASTLE , PERTHSHIRE, SCOTLAND.


Stobhall and its lands were granted to Sir John Drummond in 1367. His daughter married King Robert. The royal links brought money and power and, in the late 15th-century, the family was given permission to build another, more substantial home 25 miles to the west, Drummond Castle.

Stobhall became the family’s second home and the place where they hunted and fished and took their leisure. James IV, who courted Margaret Drummond in the gardens, fell in love with the castle, and even wrote a poem in its honour. The 16th-century chapel, restored by James Strathallan’s grandfather, David, Earl of Perth, suggests the family’s connections spread well beyond British royalty as the painted images are all of foreign monarchs, including the mythical African king Prester John and the splendid King of Mauretania on an elephant.

The Lords Drummond, elevated to the Earldom of Perth in 1605, lived there until the mid-18th century. They forfeited the title in 1715 and then Stobhall in 1745 for backing the Old and Young Pretenders, although it remained in the family through marriage.

It was restored in the 1950s when passed back to the Earl of Perth, the title having been reinstated in the 19th century. Viscount Strathallan carried out more restoration work at the beginning of this century.