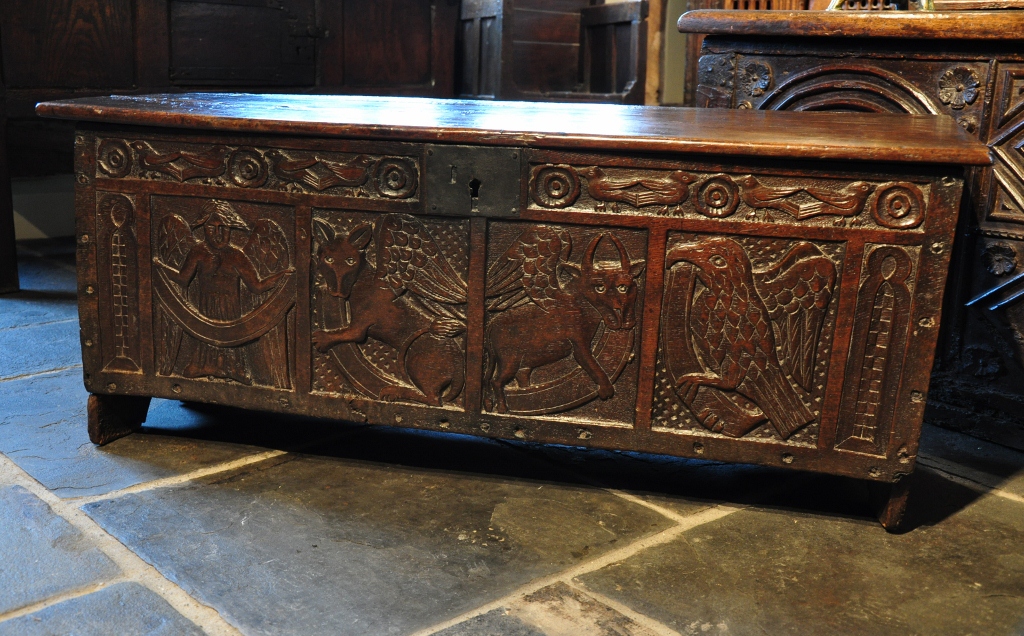 THE TWO PIECE TOP WITH THREE IRON LOOP HINGES ABOVE A MAGNIFICENT CARVED FRONT. THE FRIEZE CARVED WITH BIRDS AND ROSES, ABOVE A SIMULATED FOUR PANELLED FRONT. EACH PANEL CARVED WITH THE SYMBOLS OF THE FOUR EVANGELISTS. FROM LEFT TO RIGHT, MATHEW SYMBOLIZED BY A WINGED ANGEL, MARK SYMBOLIZED BY A WINGED LION, LUKE SYMBOLIZED BY A WINGED OX OR BULL AND JOHN SYMBOLIZED BY AN EAGLE.
THE SIMULATED FOUR PANELS ARE FLANKED ON EITHER SIDE BY TWO GOTHIC LANCET CARVINGS WITH DECORATED CENTRES.
THE FRONT OF THIS CHEST IS ALMOST IDENTICAL TO THE 14TH CENTURY CHEST IN ST NICHOLAS CHURCH, DERSINGHAM, NORFOLK SEE IMAGE.
THIS CHEST DATES FROM THE EARLY 16TH CENTURY AND POSSIBLY ORIGINATES FROM THE NORFOLK AREA. THE LOCKPLATE IS A OLD REPLACEMENT.


Evangelists' symbols,
The symbols of the four Evangelists are here depicted in the Book of Kells. The four winged creatures symbolize, clockwise from top left, Matthew, Mark, John, and Luke.
In iconography the evangelists often appear in Evangelist portraits derived from classical tradition, and are also frequently represented by the following symbols, which originate from the four "living creatures" that draw the throne-chariot of God, the Merkabah, in the vision in the Book of Ezekiel (Chapter 1) reflected in the Book of Revelation (4.6-9ff), though neither source links the creatures to the Evangelists. They are normally, but not invariably, all shown with wings like angels. The meanings accruing to the symbols grew over centuries, with an early formulation by Jerome,[2] and were fully expressed by Rabanus Maurus, who set out three layers of meaning for the beasts, as representing firstly the Evangelists, secondly the nature of Christ, and thirdly the virtues required of a Christian for salvation:[3] One might note that these animals may have originally have been seen as representing the highest forms of the various types of animals, i.e., man, the king of creation as the image of the Creator; the lion as the king of beasts of prey (meat eating); the ox as the king of domesticated animals (grass eating) and the eagle as the king of the birds.
Matthew the Evangelist, the author of the first gospel account is symbolized by a winged man, or angel. Matthew's gospel starts with Jesus' genealogy from Abraham; it represents Jesus' Incarnation, and so Christ's human nature. This signifies that Christians should use their reason for salvation.
Mark the Evangelist, the author of the second gospel account is symbolized by a winged lion – a figure of courage and monarchy. Mark has John the Baptist preaching "like a lion roaring" at the beginning of his Gospel. It also represents Jesus' Resurrection (because lions were believed to sleep with open eyes, a comparison with Christ in the tomb), and Christ as king. This signifies that Christians should be courageous on the path of salvation.
Luke the Evangelist, the author of the third gospel account (and the Acts of the Apostles) is symbolized by a winged ox or bull – a figure of sacrifice, service and strength. Luke's account begins with the duties of Zacharias in the temple; it represents Jesus' sacrifice in His Passion and Crucifixion, as well as Christ being High priest (this also represents Mary's obedience). The ox signifies that Christians should be prepared to sacrifice themselves in following Christ.
John the Evangelist, the author of the fourth gospel account is symbolized by an eagle – a figure of the sky, and believed to be able to look straight into the sun. John starts with an eternal overview of Jesus the Logos and goes on to describe many things with a "higher" level than the other three (synoptic) gospels; it represents Jesus' Ascension, and Christ's divine nature. This represents that Christians should look on eternity without flinching as they journey towards their goal of union with God.

Each of the symbols is depicted with wings following the biblical sources first in Ezekiel 1-2, and in Revelation. The symbols are shown with, or in place of, the Evangelists in early medieval Gospel Books, and are the usual accompaniment to Christ in Majesty when portrayed during the same period, reflecting the vision in Revelations. They were presented as one of the most common motifs found on church portals and apses, as well as many other locations. When surrounding Christ, the figure of the man is usually at top left – above Christ's right hand, with the lion above Christ's left arm. Underneath the man is the ox and underneath the lion is the eagle. This both reflects the medieval idea of the order of "nobility" of nature of the beasts (man, lion, ox, eagle) and the text of Ezekiel 1.10. From the thirteenth century their use began to decline, as a new conception of Christ in Majesty, showing the wounds of the Passion, began to be used.[4] Sometimes in Evangelist portraits they appear to dictate to the writing evangelist. All four evangelists are all Jesus's disciples.