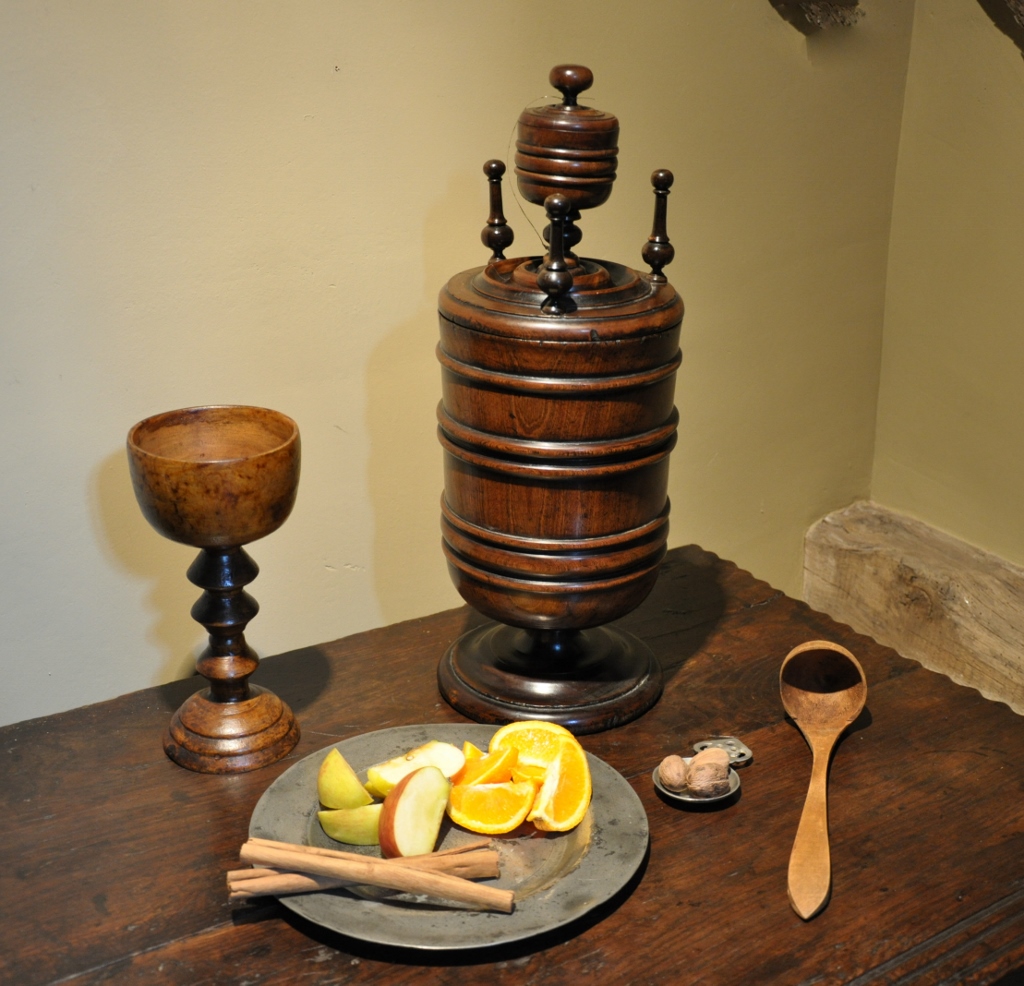 THIS RICHLY PATINATED WASSAIL BOWL HAS THE RARITY OF STILL HAVING ITS ORIGINAL COVER COMPLETE WITH SPICE POT AND COVER. THE THREE TURNED FINIALS WOULD HAVE HELD THREE SMALL TURNED CUPS.

Wassail (Old English wæs hæl, literally 'be you healthy') refers both to the salute 'Waes Hail' and to the drink of wassail, a hot mulled cider traditionally drunk as an integral part of wassailing, an ancient southern English drinking ritual intended to ensure a good cider apple harvest the following year.
In the cider-producing counties in the South West of England (primarily Devon, Somerset, Dorset, Gloucestershire and Herefordshire) or South East England (Kent, Sussex, Essex and Suffolk) wassailing refers to a traditional ceremony that involves singing and drinking the health of trees in the hopes that they might better thrive. The purpose of wassailing is to awaken the cider apple trees and to scare away evil spirits to ensure a good harvest of fruit in the Autumn.[2] The ceremonies of each wassail vary from village to village but they generally all have the same core elements. A wassail King and Queen lead the song and/or a processional tune to be played/sung from one orchard to the next; the wassail Queen is then lifted into the boughs of the tree where she places toast soaked in wassail from the clayen cup as a gift to the tree spirits (and to show the fruits created the previous year). In some counties the youngest boy or "Tom Tit" will stand in for the Queen and hang the cider soaked toast in the tree. Then an incantation is usually recited.

Wassail the beverage is a hot, mulled punch often associated with Yuletide. Historically, the drink was a mulled cider made with sugar, cinnamon, ginger, and nutmeg and topped with slices of toast. Modern recipes begin with a base of wine, fruit juice, or mulled ale, sometimes with brandy or sherry added. Apples or oranges are often added to the mix. While the beverage typically served as "wassail" at modern holiday feasts with a medieval theme most closely resembles mulled cider, historical wassail drinks were completely different, more likely to be mulled beer or mead. Sugar, ale, ginger, nutmeg, and cinnamon would be placed in a bowl, heated, and topped with slices of toast as sops.

Hence the first stanza of the traditional carol the Gloucestershire Wassail dating back to the Middle Ages:


Wassail! wassail! all over the town,
Our toast it is white and our ale it is brown;
Our bowl it is made of the white maple tree;
With the wassailing bowl, we'll drink to thee.