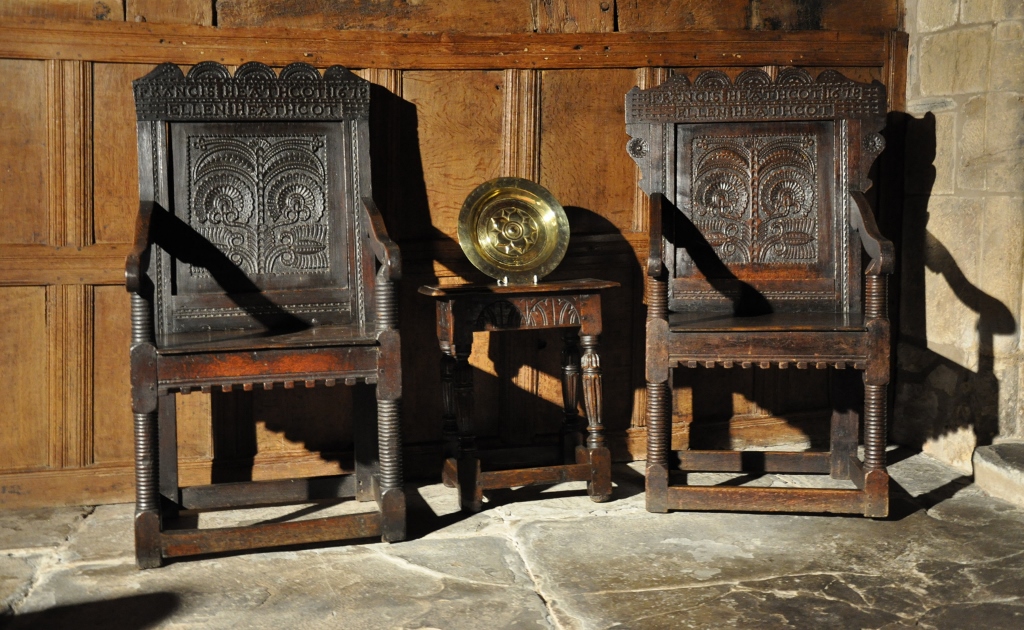 Each back panel finely carved with a highly stylized plant having pairs of lotus and daisy flowers below pointed crescent-shaped leaves, headed by a triple-arcade profiled cresting carved Francis Heathcot 1678, over Ellen Heathcot, each christian and surname, together with the date contained within a scallop-carved frame, the remaining cresting gauge-carved throughout, the downswept open-arms with incised linear-edge decoration, the boarded seat over lower-edge crenellated and channel-moulded rails, with multiple ring-turned front legs and arm supports, plain stretchers, losses and restorations.

THESE EXTREMELY RARE CHAIRS HAVE ONLY JUST WITHIN THE LAST SIX MONTHS BEEN REUNITED TOGETHER,THEY HAVE POSSIBLY BEEN APART FOR TENS IF NOT HUNDREDS OF YEARS,AS WITH MANY LARGE FAMILIES THE CHATTLES UPON DEATH ARE SHARED OUT BETWEEN FAMILY MEMBERS AND IN THIS CASE THERE IS PROBABLY NO EXCEPTION.
THIS RARE PAIR OF CHAIRS MADE TO COMMEMORATE THE MARRIAGE OF FRANCIS HEATHCOT TO ELLEN HEATHCOT/ NEE LOWE, ARE OF THE HIGHEST QUALITY,BOTH THE CHOICE OF TIMBER AND THE EXECUTION OF THE CARVING DETAIL IS OF THE HIGHEST QUALITY.

THE STORY OF THESE TWO REMARKABLE CHAIRS IS AS FOLLOWS AS WE SEE IT, THE "REUNITING"
THE CHAIR WITHOUT THE EARS WAS CONSIGNED TO A SOUTH OF ENGLAND AUCTION HOUSE WITHIN THE LAST SIX MONTHS BY THE HEATHCOTE FAMILY, IT WAS PURCHASED BY AN UNKNOWN BUYER WHO MUST HAVE OWNED THE OTHER CHAIR AND REUNITED THESE TWO CHAIRS BACK TOGETHER AGAIN.
SO IT IS WITH GREAT PLEASURE I OFFER THIS REMARKABLE PAIR OF CHAIRS TO THE PROSPECTIVE PURCHASER COMPLETE WITH THIS PROVENANCE:
Marriage registers show that Francis Heathcot[e] married Heallen [Ellen] Lowe on 15th May 1678 at St James Church in Taxal, Cheshire. Her father's name was John Lowe, and Francis Heathcot's address is listed as Ringstones.

When the baptism of their daughter Alise was recorded on 5th February 1680, their address was recorded as 'Ringstone'. Two more daughters were baptised in the same church. Anne, on 8th April 1682, and Mary, on 21st May 1684.

The will of Francis Heathcoat of Taxal, Cheshire, records his occupation as Yeoman, and that he owned lands in the parish of Chapel-le-Frith, Green Fairfield and Hartington in Derbyshire, the profits of which he disposed to his daughters Alice, Anne, Mary and Sarah, and to his sons John, Rowland and George. Another daughter, Elizabeth, is mentioned, married to 'my son-in-law Michael Heathcott'. His goods and estates - unfortunately not specifically listed - were to be divided between his wife and daughters Alice, Anne, Mary and Sarah.

His executors were Thomas Mellor of Chapel-le-Frith and William Brock of Oldfield in taxal. Peter Legh of Lyme, Esquire - Lyme Park - and John Shallcross of Shallcross Esquire, were appointed overseers.

It is possible that Francis and Ellen's son Rowland Heathcot was the father of Michael Heathcot, who served as Groom of the Pantry and Yeoman of the Mouth (food taster) to King George II.

Literature: A small selection of furniture branded or carved with the owner's initials or name, is illustrated and discussed, Victor Chinnery, Oak Furniture: The British Tradition, (1993) pp. 57 - 63. The author notes that items of furniture carved with a full-name and date are mostly attributed to the North Country and accordingly illustrates two examples of seat furniture, p. 63, figure 2:21. The first is an oak backstool or side chair, with a rare box-seat, carved to the back panel 'Dorothy Garrard 1685'. The lettering 'font' used on the backstool shows distinct similarities to that found here, with the words also contained within a scallop-edged surround. Furthermore, both 'Dorothy' and 'Garrard' are flanked by a single-flowerhead, highly suggestive of the flower used to ornament the back-ears to one chair. The second illustrated item is a panel-back armchair carved 'Thomas Kyrke 1680'. The general form and design of the 'Kyrke' chair is generally similar to that employed here. Notably, the triple cusped-profile to the top of each cresting, together with the short downswept scroll-ends; the shape of the ears; the crenellations to the front seat-rail (only the front rail is shown); and the simplicity of the stretchers compared with the chairs ornate treatment to most other areas. The multiple ring-turning to the supports on both illustrated chairs, although different, should also be noted.