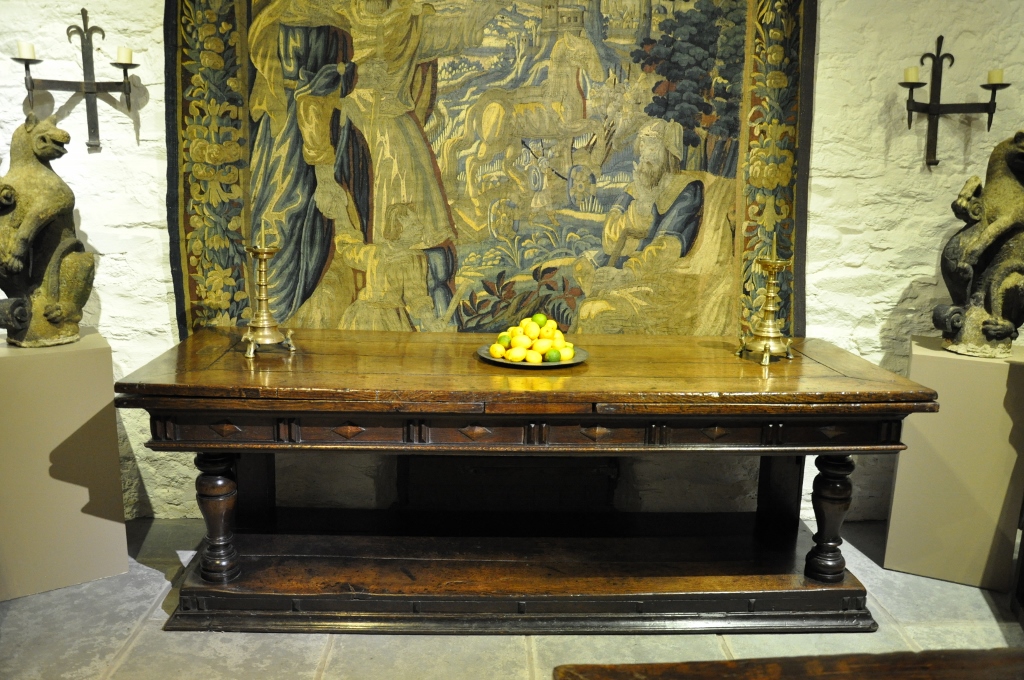 THIS SUBSTANTIAL SCOTTISH OAK DRAWLEAF DINING/ SERVING TABLE OF THE JACOBEAN PERIOD CIRCA 1620 IS OF FINE COLOUR AND PATINATION. IT STANDS ON TWO HEAVY TURNED FRONT LEGS AND TWO HEAVY SQUARE MOULDED BACK LEGS. THE TABLE CLOSED IS 7FT 11" LONG AND WHEN OPEN 14FT 10" LONG. MADE TO BE SAT AGAINST A WALL WHEN NOT USED AND AS A LARGE DINING TABLE WHEN PULLED OUT AND EXTENDED, IT HAS APPLIED MOULDING DECORATION ALL THE WAY AROUND AND A FINE UNDER SHELF OF WONDERFUL COLOUR.

THIS VERY STURDY SUBSTANTIAL TABLE WAS DESIGNED TO BE PORTABLE AND CAN EASILY BE DISMANTLED.

Provand's Lordship, referred to as 'the oldest house in Glasgow' is a rare example of 15th century Scottish domestic urban architecture. Originally built in 1471 by the Bishop of Glasgow, Andrew Muirhead, as the manse for the Chapel and Hospital of St Nicholas. The house also served as accommodation for a clergyman who is thought to have drawn his income from the rents and taxes of Barlanark, or Barlernock, and was known as 'Lord of the Prebend of Balernock', which eventually corrupted to 'Lord of Provan'; the house takes its name from this title. The Provand's Lordship Society was found in 1906 to help save this rare Medieval building from neglect and disrepair. After the acquisition of the building it was furnished, mostly with 17th century furniture, with the help of Sir William Burrell.

Literature: An oak draw-leaf table, also with a boarded base, but the alternative use of bulbous trestle-type supports, is illustrated Percy Macquoid, A History of English Furniture: The Age of Oak (1925), p. 115, Figure 96. Listed as the property of Lady Augusta Mostyn, the author dates the table to circa 1570 and gives a Welsh regional attribution. An oak draw-leaf table, dated to circa 1650, with inverted-baluster turned legs, comparable to the elongated-baluster front legs on this lot, illustrated Herbert Cescinsky, The Old World House: Its Furniture & Decoration (1924), Vol. I, p. 188.

An example of a fine piece of oak furniture, a cabinet on stand, in the 'Laudian taste' as referred to here, is illustrated Victor Chinnery, Oak Furniture: The British Tradition (1993), p. 433, Figure 4:41. The author dates this 'most remarkable and forward looking piece' to circa 1630. The piece is characterised by its pure architectural form and use of applied 'Roman-Italiante' decoration. Several examples of furniture with applied geometric boss, as found on this fine withdrawing table, are illustrated ibid. pp. 437 - 440.