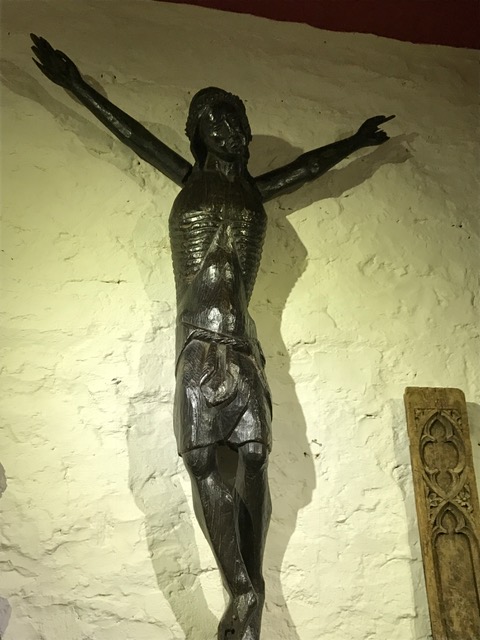 Sculpture of Christ Crucified ("Rood"), Welsh (Anglesey), oak with traces of polychrome. Reportedly recovered in Anglesey. This is the largest, best preserved, and earliest of the five British medieval wooden crucifix figures known to survive. These "rood" figures were once the most central images of medieval religious devotion, having been set up in every virtually every church and chapel in the British Isles. During the reformation and the iconoclasm of the 17th century, they were hunted down relentlessly and burned to ash. A few very few were hidden away, and fewer still survived to this day. This example, probably from a major abbey church, likely survived intact because Anglesey remained a fairly isolated and religiously conservative community - two of the other surviving British wooden crucifix figures were also found in Wales (Mochdre and Kemeys Inferior, although both are smaller and much more fragmentary. This figure's tip-toed stance, long loincloth with central pendant fold and side lappets, place it in the mid 13th century. The clean-shaven face is very unusual and almost only appears in 13th-century English art. The arms, which are original, were likely shifted from their original positions to a sharp upsweep in the 14th century, when that style came into fashion. The torso, head, and legs of the figure are worked from single stock of heavy, dense, dark-colored oak, typical of welsh timber. It appears that this piece of oak was selected for natural curvature, which allowed the sculpture to accomplish the slumped posture of the dead Christ. The crown is integrally carved but was fitted with pegs to simulate thorns, portions of which remain. The facial expression of the slightly bowed head is serene, in contrast to the twisted and emaciated body. With the addition of polychrome, traces of which survive in the recesses of the carving, this would have created a dramatic emotional impact on the medieval viewer.