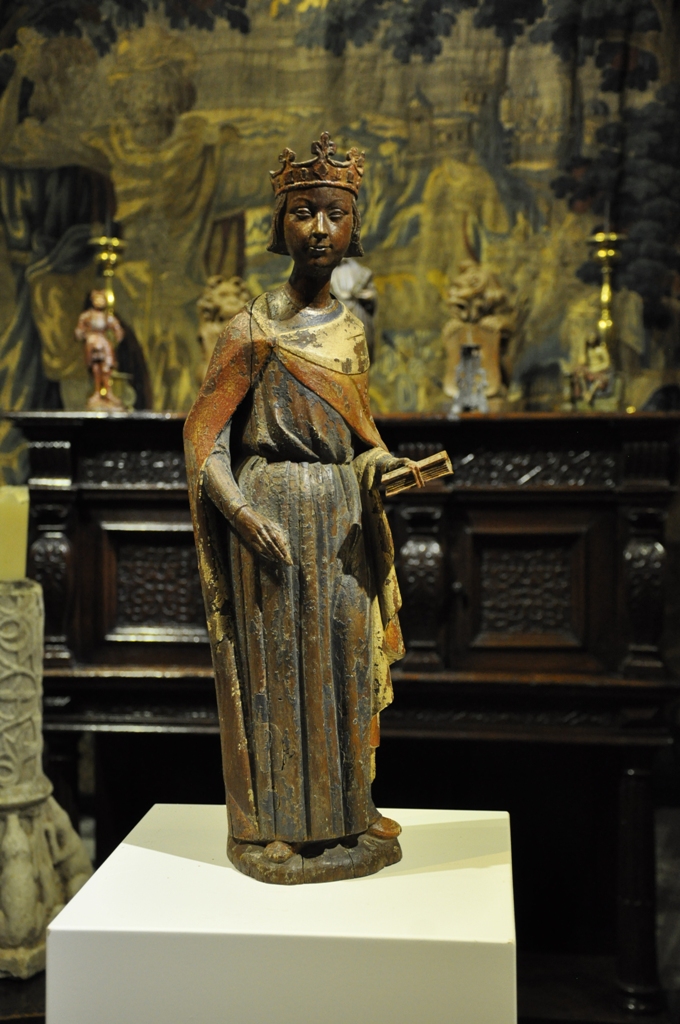 AN ASTONISHING AND IMPORTANT 13TH CENTURY ENGLISH OAK AND POLYCHROME SCULPTURE OF A MONARCH SAINT. WESTMINSTER. CIRCA 1260.

A MUSEUM QUALITY 13TH CENTURY ENGLISH SCULPTURE OF EXCEPTIONAL QUALITY, HIS EXQUISITELY CARVED FACE HAS THE MOST WONDERFUL SERENE EXPRESSION AND DETAIL WITH THE CROWN SO DELICATELY CARVED UPON HIS HEAD.

BASIS OF ATTRIBUTION: This elegant little statue of a
monarch counts among the highest quality pieces of
thirteenth-century English figure sculpture extant. It is
also one of the best preserved examples of medieval
wood sculpture and provides the clearest link to the
finest of London/Westminster Gothic manuscript
painting. The statue’s exaggerated, swan-like neck,
close-fitting, ankle-length tunic tightly belted at the
waist, and mantle draped about the shoulders in a
series of plate-like folds and fastened with a round
brooch invite immediate comparisons to the ‘Queen
Mary Psalter’ of c. 1320. Even the colour scheme
(White, gold and azurite blue) and the manner in
which the now mostly lost scepter is clasped, delicately
between thumb and forefinger, may been seen in that
manuscript. Other features – the blunt-tipped shoes
and ‘stiff leaf’ fleurons of the crown – belong to the
previous century.

The closest comparisons are to be made with the courtly
figures of the ‘Douce Apocalypse’ (Bodelian Library, MS
Diuce 180) and the now lost Palace murals – the product
of artists associated with Westminster Abbey, working in
the 1270s and 80s. Shared features include a tunic with
unnaturally high and tightly synched waist as the
primary garment and a mantel draped with a
voluminous v-fold beneath the left arm and cascading
into a series of broad , zigzagging folds below. At the
right shoulder of the royal saint, as on many of the
figures in the Apocalypse, the mantel is arranged into a
long and sharp v-shaped pleat. Also, the abdomens of the
statue and the figure of the manuscript are rounded,
almost feminine, in profile. Further evidence of the
statue’s later thirteenth-century date can be found in the
distinctive form of stiff leaf that forms the fleurons of the
crown: a trefid comprised of pad-like leaves with nodules
at their centers, a form which may also be seen on the
Exeter cathedral misericords (c. 1270-1290) - a crown of
the same design may be seen in the coronation of David
miniature of the c. 1230, London-produced, ‘Glazier
Psalter’ (Pierpont Morgan Library, Glazier 25, f. 4r). The
facial type – classicizing with silted eyes, prominent
arching brow ridges, a long, aquiline nose and delicate
mouth and chin – is closely matched on the famous mid twelfth-
century sculpted oak image of St Michael from
Mosvik (Inderøy, Norway), which is widely thought to be
an English import and associated with the Westminster
Annunciation group.

CONSTRUCTION/MATERIALS: Carved in the round and fully
finished on all sides. Composed from a piece of a single
piece of heavy and very dense deep brown coloured
oak. The left hand (now clasping a book) originally
composed of a separate piece tenoned at the wrist. The
source of the timber appears to have been a branch or
coppiced pole (oriented vertically for carving), as the
full radial cross-section is visible on the underside of the
socle. Two former knot-holes on the lower portion of
the statue’s right side filled with plugs composed of the
same type of timber.
Surface: Extensive remains of apparently original
polychrome and mordent gilding: gold and white for
the mantle; blue for the tunic; gold, red and green for
the crown; brown for the hair; red shoes. flesh tones lost
from face and hands.

FULL DETAILS AND FURTHER IMAGES-
DOCUMENTED AND ILLUSTRATED ON THE WEBSITE- INVISIBLESAINTSMYPARISH.ORG. THIS IS A COMMUNITY DRIVEN WEB BASED PROJECT TO LOCATE, DIGITALLY RECORD AND DOCUMENT THE LONG LOST MEDIEVAL DEVOTIONAL WOOD SCULPTURES OF THE BRITISH ISLES. THE ULTIMATE AIM OF THIS WEB SITE IS TO BRING THESE WORKS OF ART TO LIGHT, NOT ONLY FOR THEIR DOCUMENTATION PURPOSES BUT ALSO FOR FUTURE SCHOLARS, THE WEBSITE WAS COMPILED BY THE WARWICK ARTS DEPARTMENT OF HISTORY.