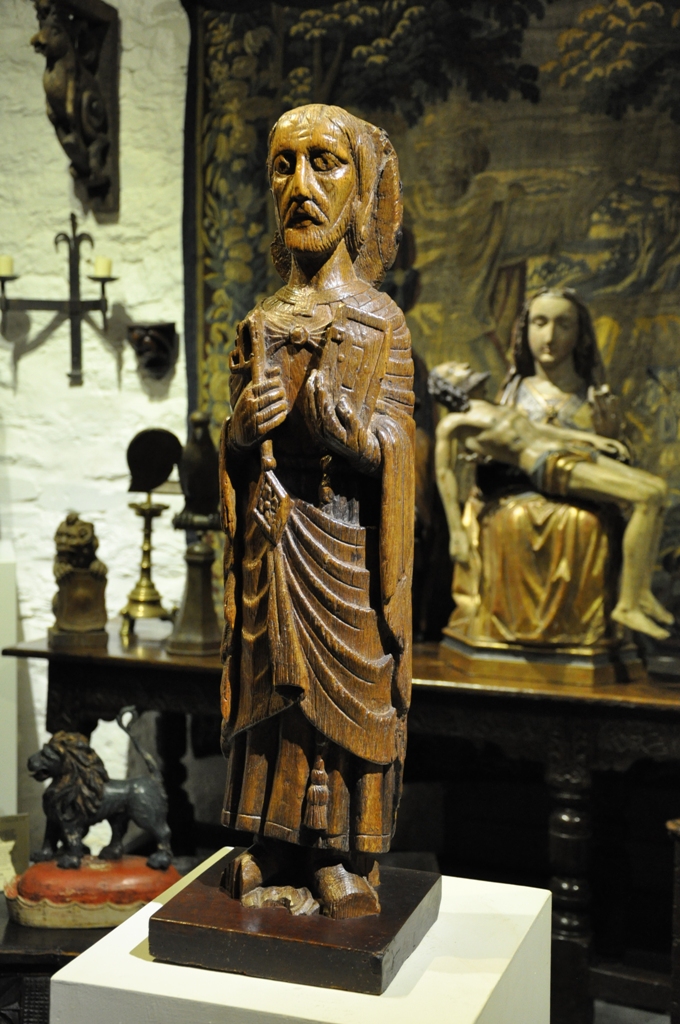 THE IMPORTANCE OF THIS HISTORICAL ENGLISH SCULPTURE CANNOT BE OVER STATED, AS IT IS POSSIBLY ONE OF THE ONLY COMPLETE EXAMPLES OF ENGLISH ROMANESQUE WOOD SCULPTURE IN EXISTENCE, OF MUSEUM QUALITY.

Saint Peter, holding a book and single key with a foliate bow and clad in monastic robes give the impression of having stepped from the pages of a 12th-century South English manuscript. The figure stands rigid and frontally. Like much Norman Romanesque sculpture, this figure appears more like a painted image, appearing to exist almost entirely in two-dimensional space. Rather than naturalisticaly following the contours of the body, drapery provides a field for a riotous display of patterned folds.

The figure’s huge, staring eyes with drilled-out pupils and short, cropped Saxon-inspired moustache solidly link it with documented South English Romanesque sculpture. Examples include the Gloucester Candlestick (V&A: 76491), the South Cerney head of Christ (British Museum: 1994,1008), the architectural sculpture from Old Sarum, and the reliefs at Chichester Cathedral. The drapery, with its repetitive, bandage-like laminate folds and nested V-folds, follows the later Anglo-Saxon model more often seen in the South, including the portal sculpture at Malmesbury Abbey (Wilts.), the painted nave at Kempley (Glos.), and the copper alloy Monmouth Crucifix. The closest parallels may be seen in the miniatures of the Shaftesbury Psalter (British Library: Lansdowne, 383). Here, the Germanic facial type combines with the very same fold types seen in the figure of Saint Peter
Carved of oak, three-quarters in the round, the figure was likely contained within a tabernacle, perhaps positioned above the principal altar in a church dedicated to Saint Peter. Peter is depicted in robes and mantel, with a nimbus or halo, which signifies his saintly status. Likely, likely the church for which this figure was intended was monastic church, as indicated by the figures robes and knotted belt. The figure also holds only a single key, which represents Christ’s covenant with the professional clergy, not the laity.
Condition

Modern applied base and ancient, nailed repair to the nimbus. Surface heavily burnished from handling, with subtle traces of polychrome. Timber is an incredibly hard, almost petrified oak. The radial twist in the gain and numerous small knots indicate that the stock likely originated from coppiced timber

PROVENANCE-
PURCHASED IN 2011 FROM A NEW ZEALAND COLLECTOR WHO ACQUIRED IT FROM THE UK IN THE 90S. THENCE FROM AN IMPORTANT PRIVATE COTSWOLD COLLECTION.

ILLUSTRATED AND DOCUMENTED ON THE WEBSITE- INVISIBLESAINTSMYPARISH.ORG. THIS IS A COMMUNITY DRIVEN WEB BASED PROJECT TO LOCATE, DIGITALLY RECORD AND DOCUMENT THE LONG LOST MEDIEVAL DEVOTIONAL WOOD SCULPTURES OF THE BRITISH ISLES. THE ULTIMATE AIM OF THIS WEB SITE IS TO BRING THESE WORKS OF ART TO LIGHT, NOT ONLY FOR THEIR DOCUMENTATION PURPOSES BUT ALSO FOR FUTURE SCHOLARS, THE WEBSITE WAS COMPILED BY THE WARWICK ARTS DEPARTMENT OF HISTORY.