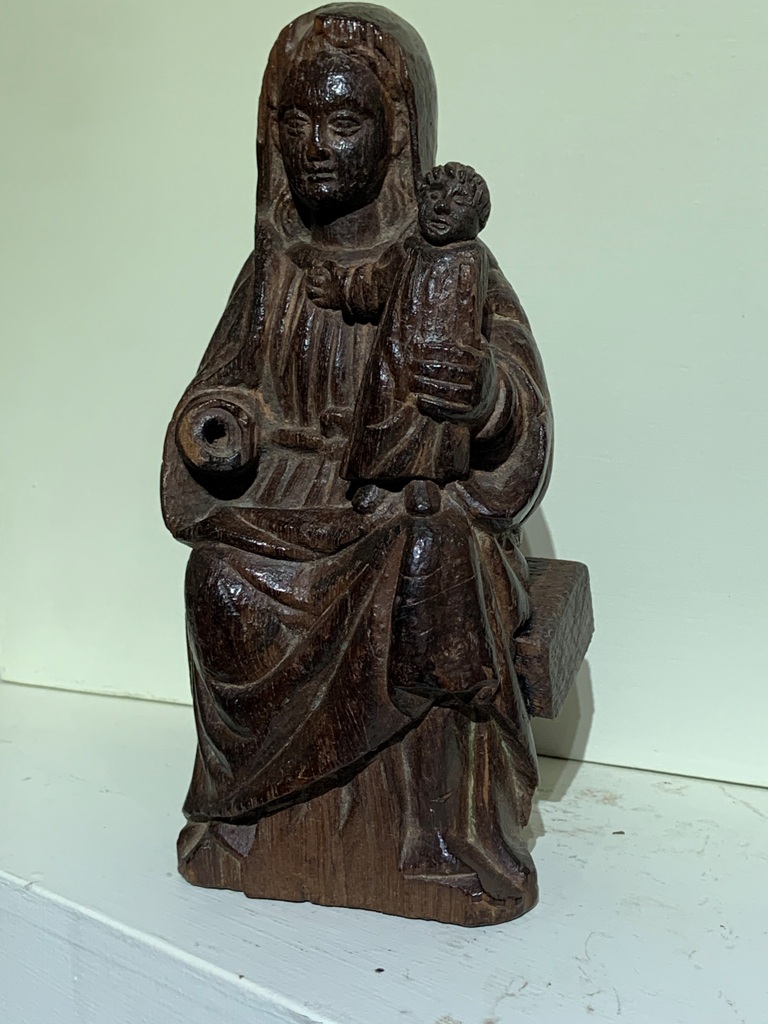 AN EXTREMELY RARE MID 13TH CENTURY ENGLISH OAK SCULPTURE OF THE VIRGIN AND CHILD. CIRCA 1250.

Mid-13th-century English oak enthroned Virgin and Child (sedes sapientiae) which mat connect directly to the most famous devotional image of medieval England, The Virgin of Walsingham.The sculpture is of small size (22cm high), as were many sculptures of the enthroned Virgin produced in Western Europe during the 12th and 13th centuries. It is carved in the round, but would once have been seated in, and pinned onto, a separately carved plinth-like throne (now lost), the profile of which is visible from the side of the sculpture. The clinging drapery, with trough-like linear folds, swirls around one knee and hangs off the other in a large pendant-like tubular pleat. This style of drapery is entirely consistent with English depictions of the enthroned Virgin dating to the first half of the 13th century, such as a small walrus ivory sculpture at in Hamburg and on the seal of Merton Priory. Very similar drapery styles may also be seen in an illuminated Psalter at the Morgan Library in New York, produced in Oxford and dating to 1212-20 (MS M 43). The sculpture’s rigidly frontal posture and impassive facial reflects the continuation of Romanesque tradition and a date not long after the 12th-century.

The unusual posture of the Christ Child (where the child reaches his hand across his mother’s breast) may connect this sculpture to England’s most famous medieval cult image, the Virgin of Walsingham. The 13th-century seal of Walsingham Priory depicts an enthroned Virgin with the Christ Child adopting this same posture. Recently, it has been revealed that the Langham Virgin at the V&A may be the lost Walsingham Virgin, thought to have been destroyed in 1539. This sculpture, which is the only other surviving English medieval sedes sapientiae Madonna, also features a Christ Child with this same reaching posture. It is a well-known phenomenon that many local churches on the routes to a major pilgrimage site, like Walsingham, possessed devotional images that were directly and stylistically inspired by the famous cult images at those sites. It is thus very likely that this little enthroned Virgin was owned by an English parish church or minor monastic foundation situated along the pilgrimage route to Walsingham. The sculpture was likely made within only a few decades of the construction of the Walsingham Virgin itself, during the height of its popularity, and by a carver who had seen that famous image first-hand.

The sculpture is remarkable survival as English images of the Virgin were heavily targeted during the iconoclasm of the 16th century.

PROVENANCE- FROM A PRIVATE ENGLISH COLLECTION.